The Official Skater of the South Lima Steelhead Society.
By Richard C. Harrington 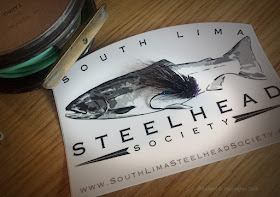 Years ago (OK, years and years), the Seth Green Chapter of Trout Unlimited, in Rochester, New York, was the sponsoring organization of the New York State Trout Forum, (a clave before any of us had ever heard of a clave). Poul Jorgenson was one of the featured presenters. He sat and tied a beautiful Sir Conrad (which I snagged later at the auction), demonstrated a two-feather mayfly pattern, then answered a few questions. He had a few minutes left, and said that he had a fly he liked to use to demonstrate his emphasis on proportion and the use of squinting to check those proportions. It was a Muddler Minnow, or more accurately, a variant. It was nothing but the deer hair head and collar, spun on a hook, then trimmed to a sculpin-ish head shape, with the longer collar hairs flowing off the back, giving a pretty good impression of life.

I loved that fly. At the time I was fairly obsessed with fully dressed salmon flies, and was a big Jorgensen junkie, referring to his book constantly in my tying. But the simplicity of that fly, the emphasis on form, appealed to me. Later that week I whipped up a few and stuck them in my box. At the same event, we had Joe Humphries in attendance, and after a parking lot casting challenge/demonstration early the next morning, we were visiting, and he mentioned that when streamer fishing, one of his favorite flies was a Muddler, and he felt it fished much better if he put a few in a vial of water the night before, so the heads were pre-soaked, causing the fly to sink immediately once he was on the water.

Oh, man. Man, oh, man, oh, man. I was gonna slay. I tied up full muddlers, sort of reduced, low water style versions and Mr Jorgenson’s super reduced variation. I had damp pockets on my verst from my presoaking vials. I fished them hard. Swinging, stripping, casting upstream, cross- stream, down and across. I tried Leisenring lifts, I pinched micro shot on the leader ahead of them. I even floated some dry ones dead drift, having read it was a grasshopper pattern in a pinch.

I caught jack shit. Not a one. Not a single trout, bass or sucker.

Eventually I dropped muddlers from my lineup all together.

About 30 years later, I sat on the bench under Lee Spencer’s tarp along Steamboat Creek. After an hour of hanging out, watching, quiet visiting, and playing gently with his pup, Lee said, So, your’e pretty serious about steelhead. I was a little startled and said, Well it is fishing, so I try and keep it in perspective. But you know how it’s really popular right now to say men can’t multi-task? Well, I figure I’m actually a pretty decent multi-tacker, as I think about steelhead, pretty much all the time, and still get other things done. He laughed, and we got to talking in earnest. And at the end of our conversation, the final point he made was that there was no reason at all, fishing to summer run fish on that hallowed river, to ever need a sunk fly. (Don’t get me wrong- if/when I get down there in the winter, I’m fishing tips- I’m not some Hirano-type purist). But, he’d said, The strain of fish in this river will come up through thirty feet of water to hit a skated fly.

So what fly do you skate? I’d asked. He said, I just tie a little, sparse whispy version of a muddler- really sparse, and then hitch it behind the head. It skates right along.

We parted ways, me off to fish. It was my first time on the river. I had no clue where to fish. I got back down to the highway and on impulse, headed upstream. A few minutes later I was stopped by a flagman. How long? I asked. 45 minutes to an hour, was the response. I thought about heading back downstream, but I’d camped quite aways up. And since I had no clue about where to fish, the river next to me seemed as good as any. I pulled off onto the shoulder, wadered up, and scrambled down to the river. I rigged my rod, sat on a boulder and pulled out my flybox.

I’m a packrat by nature. It’s a genetic problem, and I knew there were a couple old muddlers- old, like 30 yeas old- in the corner of my box. They were fairly fully dressed, the only real difference being a fox wing in place of the turkey quill. I pulled one out, knotted it on, and tied a hitch between the head and the collar as Lee had demonstrated. It mashed the shit out of the head, but she skated. And there, at the bottom of that long slide, I headed into the tunnel of overhanging branches, wading that slippery-assed river for the first time, rock to rock, and happy as a clam as I watched my little bug waking across the apparently bottomless, blue-black depths. 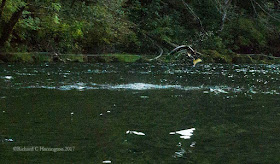 Two hours in, not a swirl, and my previous muddler experience was creeping into my mind. Lee was pretty convincing, but so was my much earlier 5 year stint of striking out with Muddlers. And I was exhausted. I sat down and pulled out some cheese and crackers, and a beer. As the beer disappeared, the slab on which I sat seemed to get flatter, more moss-covered and more inviting. And I do love a stream side nap. I propped my Meiser up out of the way, set my small pack as a pillow, and laid down, looking at the river. The beautiful deep, dark currents, the massive boulders, that big pillow of water in front of that house-sized midstream boulder. I could not sleep, not with that beautiful lie facing me.

I shook off the nap and grabbed my rod. I stepped off my bed-rock, and onto a 18 inch wide, waist-deep shelf, nothing but dark below the toes of my boots. I rolled out about 30 ft of line and leader, and started the swing. The view of my little bug waking along was great, my head only about three feet above the surface. A dozen or so casts into the run, my fly climbed onto the pillow in front of the boulder, and about half way across, it disappears into a good sized silver snout. When he felt the hook, he launched and all three jumps seemed to soar above my head.

I felt too precarious in my position to move, and I was lucky he was more interested in bulldogging than running. Eventually I had him at my perch, got him by the tail and slipped the fly free.

Two days later, after a steep hike/slide down, and a quick nap waiting for the sun to drop behind the trees and shade the run, my little bug skated through a bunch of trout rising to a light caddis hatch. The Muddler got plucked and sipped continuously, and I wondered if there was a steelhead in that bottomless dark water he’d want to complete with all these little trout. The explosion that followed answered that, and after a great tussle in the waning light, I landed the second fish in three days.

That was my introduction to an amazing river. I’ve never wanted to fish it differently since, but I haven’t been able to keep myself from tweaking my muddler. I seem to get ever close to Mr. Jorgenson’s head-only dressing, but I do like a touch of razzle-dazzle. At this point I’ve settled on a body of diamond braid, a few strands of crystal flash as an underwing, and the deer hair wing and head. I like to mix the colors of deer hair, blue/black, purple/black, or orange/black (October Caddis). I prefer died hair, as I think the dying process leaves it stiffer. I tie the head longer and looser than what will most often be found in shop fly boxes, and trim it tight and flat on the bottom, as I’ve found it skates better for me. I think the longer loose fibers give a flexible shoe at the point of impact of the water against the head, providing more lift than the dense, tight heads normally associated with muddlers. And that is entirely an opinion, not a wisp of fact to back it up. 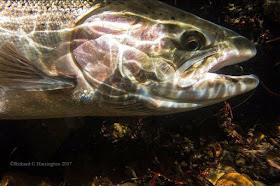 A few years later, back in western NY, after my third or fourth trip to that river, my buddy, Coop and I were fishing tubes on our favorite eastern river. He’d asked about the most recent western trip and I was explaining the hitched muddler. “And you hitch it behind the head? The fly is knotted at the eye, and then pulled back and half-hitched behind the head, completely mashing the crap out of the head?

Pretty obvious where this was going. We’ve been friends a long time.

“That has got to be the most inelegant thing I’ve ever heard of you doing with a fly,” he said with mock disgust.

Well, I couldn’t argue. It did look like hell. And the solution was ridiculously simple. Just a wee neck between the head and eye, room for a double turle with a hitch behind it. I was concerned the point of impact of the water would change too much, not providing the lift I want, but it works great, with no inelegance to be humiliated by. 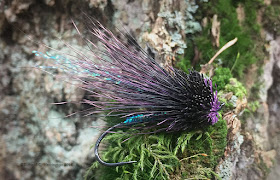 To this day, about seven years in, visiting two or three times each year,  it’s the only way I’ve fished that river. It’s been good to me.

I love muddlers. I’ll take mine hitched, and skating please.